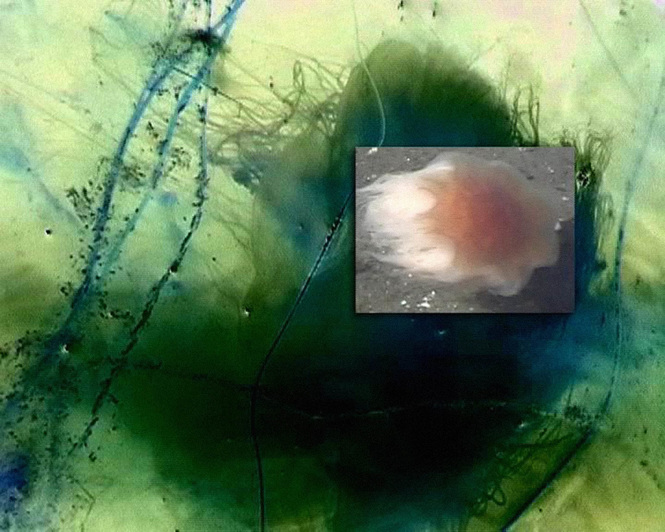 Tense. Less. Ness. The state of being less tense. I immediately associated to the jellyfishes lying in my large memory bank of filmed video material. One-celled beings suspended between heaven and earth, supported only by the ocean.

All new cells are created from a mother cell, and will maintain a bit of their origin from that same cell, for ever and ever, successively. We live in an interval where the past and the future are separated from the present in which we seem to be forgetting the innate and deeper knowledge of our far past. So: Jellyfish. The one-celled point of departure. Origo.

My proposition has been to tell that story through the relation of the aesthetics of movement, the beat of drums, and the merge into the real world.  A one-celled piece of video-art.

About my way of working:
I work in three directions. One, where I use material as when writing poetry, letting shots and contents that inspire me during a particular train of thought, come to use. I call these ”haiku films”.  I often make my own music using documentary sounds together with a simple music program.
In the second direction, I use the filmed material as if I were painting, making use of the wonders of digital tools: in speed, rythm and colour, and especially form. I call these ”video paintings”, sometimes without sound, to be viewed only as moving art work. But I also work with very long, slow and extended films, wanting only to guide the viewer into a particular state of mind.
And the third direction is spatial. Having used some of these films for installations, I now aim to continue experimenting specifically with projectionforms.
Powered by